By JPEX Media | Articles | No Comments

While the FAA expected the St. George runway to last 20 years, it’s now being replaced after only eight. The unforeseen problem was the expansion of blue clay soil’s

Blue clay is predominantly found in Utah’s southern region and composed of smaller bedanite soils deposited by prehistoric rivers and lakes derived from volcanic ash does a blue-gray color. Although precautions were takin on the runway when it was originally built, when water and heat were added, it quickly absorbed and expanded, resulting in movement.

So as you can see they’ve gone down 17 feet and they are actually starting to bring in the clay, the optimally moisturize clay, that they will use for the first 5 feet to act as a plug. And then over here you can see them bringing in native material that will actually come up another 12 feet and then once that is done Dell put in a membrane and then additional material and natural material comes up the last foot and a half.

With 5400 feet of runway to replace excavation crews are working on thousand-foot sections at a time. Soils are being taken out and dumped at the end of the runway while new soil is stockpiled for replacement. They constantly compacting the soil after it is laid down construction crews are making sure the class oils are fully expanded before being added to the mixture.

Blue clay runs all the way down to several hundred feet below the surface. Obviously we can’t take it all out so basically what that is is 17 feet of geological pressure on top of the blue clay and will keep it from moving an inch or less.

Using a GPS driven system the Geotech crews are in constant radio communication with the construction crews and are able to pick up any hazards or problems along the way.

so when we look at the compactor this soil is being placed and all the processes that are going through it, they feel quite confident that this is going to work. This is a good fix.

The new fix actually has a drain line that actually drains the material right off the edge of the runway and takes it out to the beach is underground. That should fix that problem too

Crews are running five days a week 24 hours a day on the reconstruction of the St. George Regional Airport runway the airport has been shut down for about two weeks so far they are right on schedule.

While it may be inconvenient for travelers during the summer months, it was the best time for the reconstruction.

TSA or transportation safety administration sent their people on to other locations as to the airlines that operate inside this airport which includes Skywest Airlines, Delta, United, American and Allegiant. At a cost of around $26 million, about half of that comes from the airport improvement fund and travelers. And the rest is funded by the federal government.

120-day project. The cost was around $26 million. 12.7 of that comes from the AIP funds, which is the airport improvement funds. And that money is funded by the airlines, so when people fly or buy fuel or when people fly on the airlines, that’s where that money comes from. The other $11.1 million came from President Trump’s infrastructure funds. And then about 2.3 million came from past facility charges, which we collect $4.50 every passenger that flies out of our airport.

The airport will also resurface the airport parking lot during the closure. Using an estimated 50 pieces of equipment at any one time, Chris will continue to move about 300,000,000 yards of dirt during this process one giant shovel full or dump truck four at a time. And barring any other unforeseen problems crew shouldn’t need to rebuild this runway for another 20 years.

I just think that the public should be quite confident and have good feelings about what’s taking place here.

But I promise that when we open back up in September, and of September, there will be a great, nice smooth, flat runway for you and will have additional service to Dallas Fort Worth. So come back.

JP Excavating was featured in the new Wheeler commercial

By jpexAdmin | Articles | No Comments
0

By jpexAdmin | Articles | No Comments 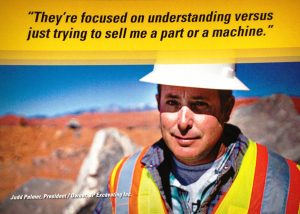